This is one of those projects that I am very happy to have finished.  I absolutely love the finished object, but man, it was a mission to get there! 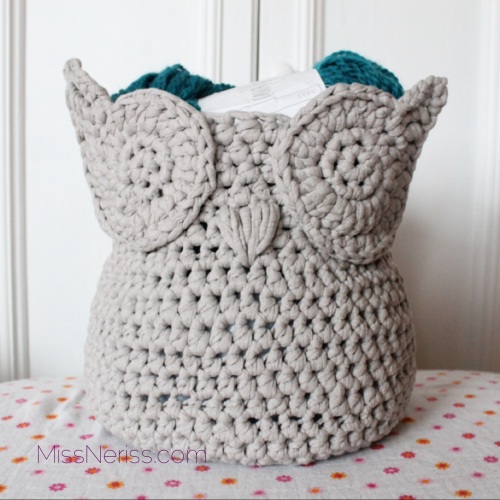 When I was contacted to make this basket as a custom order I thought, no problem!  I can do that with two fingers in my nose (Dutch expression).  Ha.  What a fool I was.  It was one thing after another trying to get it done.

Firstly, the yarn was out of stock (and production), so we had to hunt for an alternative, and then halfway through making the basket I realised that I shouldn’t be using the 12mm hook that the yarn calls for, because the basket was just going to sit in a pile and not become anything at all.

So I frogged it and started over.  Then I was halfway again, and realised that there just was not going to be enough yarn to complete it, and to buy more was just not feasible.  At 9 euros a skein plus 6 euros shipping, it would make the basket either unaffordable, or I would lose money on it.

So, I frogged most of it to make it slightly smaller.  Then towards the end I noticed it was going to be very tight to finish the basket AND make the eyes and nose, so started making them from the other end of the yarn to make sure.  It was then a matter of crocheting up until I ran out of yarn.

In the end, I am very happy with the results.  The eyes look great, and it will be a wonderful addition to its new home.

I bought the pattern on Craftsy, it’s by Deja Jetmir.